**Note: I have updated this story with images that respect Leelah’s preference for long hair rather than short hair.

**Trigger warning for discussion of suicide & inclusion of a suicide note.

I haven’t had much time to process the disgusting situation surrounding the suicide of transgender teen, Leelah Alcorn. All I know is that I feel so compelled to write about it. I have been struggling with writing a post about why mental health is a feminist issue and without trying to monopolize on her death, THIS IS WHY MENTAL HEALTH IS A FEMINIST ISSUE.

For those of you who don’t know, Leelah Alcorn, was a 17 year-old transgender teen who committed suicide last weekend by walking the wrong way on an Ohio highway when she was struck by a tractor trailer. Before her death, Leelah left this tragic suicide note on her Tumblr account, which now appears to have been taken down but an archive’s available here. 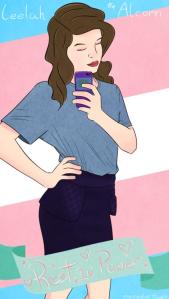 via LGBT art on Tumblr.com

If you are reading this, it means that I have committed suicide and obviously failed to delete this post from my queue.

Please don’t be sad, it’s for the better. The life I would’ve lived isn’t worth living in… because I’m transgender. I could go into detail explaining why I feel that way, but this note is probably going to be lengthy enough as it is. To put it simply, I feel like a girl trapped in a boy’s body, and I’ve felt that way ever since I was 4. I never knew there was a word for that feeling, nor was it possible for a boy to become a girl, so I never told anyone and I just continued to do traditionally “boyish” things to try to fit in.

When I was 14, I learned what transgender meant and cried of happiness. After 10 years of confusion I finally understood who I was. I immediately told my mom, and she reacted extremely negatively, telling me that it was a phase, that I would never truly be a girl, that God doesn’t make mistakes, that I am wrong. If you are reading this, parents, please don’t tell this to your kids. Even if you are Christian or are against transgender people don’t ever say that to someone, especially your kid. That won’t do anything but make them hate them self. That’s exactly what it did to me.

She goes on to say that since her parents took her only to Christian therapists and therefore she couldn’t get help for her depression.

My mom started taking me to a therapist, but would only take me to christian therapists, (who were all very biased) so I never actually got the therapy I needed to cure me of my depression. I only got more christians telling me that I was selfish and wrong and that I should look to God for help.

When I was 16 I realized that my parents would never come around, and that I would have to wait until I was 18 to start any sort of transitioning treatment, which absolutely broke my heart. The longer you wait, the harder it is to transition. I felt hopeless, that I was just going to look like a man in drag for the rest of my life. On my 16th birthday, when I didn’t receive consent from my parents to start transitioning, I cried myself to sleep.

I formed a sort of a “fuck you” attitude towards my parents and came out as gay at school, thinking that maybe if I eased into coming out as trans it would be less of a shock. Although the reaction from my friends was positive, my parents were pissed. They felt like I was attacking their image, and that I was an embarrassment to them. They wanted me to be their perfect little straight christian boy, and that’s obviously not what I wanted.

So they took me out of public school, took away my laptop and phone, and forbid me of getting on any sort of social media, completely isolating me from my friends. This was probably the part of my life when I was the most depressed, and I’m surprised I didn’t kill myself. I was completely alone for 5 months. No friends, no support, no love. Just my parent’s disappointment and the cruelty of loneliness.

At the end of the school year, my parents finally came around and gave me my phone and let me back on social media. I was excited, I finally had my friends back. They were extremely excited to see me and talk to me, but only at first. Eventually they realized they didn’t actually give a shit about me, and I felt even lonelier than I did before. The only friends I thought I had only liked me because they saw me five times a week.

That’s the gist of it, that’s why I feel like killing myself. Sorry if that’s not a good enough reason for you, it’s good enough for me. As for my will, I want 100% of the things that I legally own to be sold and the money (plus my money in the bank) to be given to trans civil rights movements and support groups, I don’t give a shit which one. The only way I will rest in peace is if one day transgender people aren’t treated the way I was, they’re treated like humans, with valid feelings and human rights. Gender needs to be taught about in schools, the earlier the better. My death needs to mean something. My death needs to be counted in the number of transgender people who commit suicide this year. I want someone to look at that number and say “that’s fucked up” and fix it. Fix society. Please.

On Reddit, Leelah spoke openly about what happened when she admitted to her mother than she was transgender and that she engaged in self-harm and thought about suicide:

I came out to my mom. She reacted extremely negatively, telling me that it was a phase, that I would never truly be a girl, that God doesn’t make mistakes, that I am wrong, and it felt awful.

She then proceeded to tell my Dad without my consent, and they were both extremely angry with me. They never physically hurt me, but they always talked to me in a very derogatory tone. They would say things like “You’ll never be a real girl” or “What’re you going to do, fuck boys?” or “God’s going to send you straight to hell”. These all made me feel awful about myself, I was christian at the time so I thought that God hated me and that I didn’t deserve to be alive. I cut myselfat least once every couple days, and I was constantly thinking about suicide. 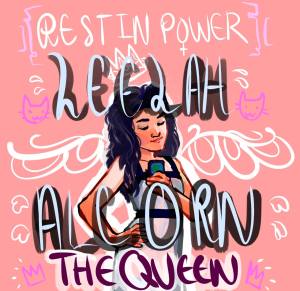 I’m not going to mince words, these religious zealots killed their daughter. It was their own bigotry that led to Leelah’s death. Parents like this should be tried for murder or at the very least, abuse. If Leelah had found a place where she felt accepted and could see a future for herself, she would probably still be alive.  And this makes me extremely, fucking angry! This girl died because of her gender orientation and being ostracized by her own parents. They made her hate herself. And why? Because of her gender? What the actual fuck!

So back to my original point – why is mental health is a feminist issue? Because LGBTQ youth experience higher rates of suicide, depression, self-harm and substance abuse.

According to the Canadian Mental Health Association, LGBTQ youth experience:

There is also evidence that LGBT people are at higher risk for substance use issues than the general populationxiv:

I don’t have a point really to this post, I’m more expressing my outrage at the stupidity of religious extremism and bigotry that led to a poor girl’s suicide. And if there are any LGBTQ teens out there listening, there is a place for you in this world. It does get better. And suicide is never the answer.

Jaclyn Glenn does a great vlog about Leelah on her YouTube page:

The Trevor Project operates a 24-7 confidential hotline for LGBT youth. If you’re in crisis or feeling suicidal, please call 1-866-488-7386, chat with them online here, or text them here.