This week has been extremely difficult. I have been in the throes of a bipolar mixed state. This means that I am simultaneously experiencing a depressive and hypomanic episode. This means that I have been dealing with rage and agitation while simultaneously being too exhausted to move. It is like being at war with yourself. Like hypomania, there is no sleep, but unlike hypomania there is no excess of energy. There is no elation. There is no abundance of life. Instead you are morose, sad, and teary. 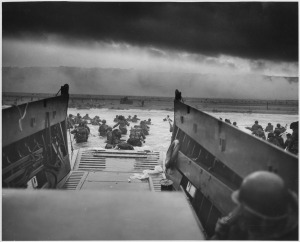 I have spent the week trying to tamper the rage and muddle through my responsibilities with the exhaustion. The anger comes in waves. No, a wave is too gentle for what happens. The rage is more like a tsunami. The sheer force and violence picks me up like I am nothing more than a shred of paper. It thrashes me about until I am bruised and battered. My skin raw and bleeding. Anger, like water, fills my nose, mouth, and lungs; it threatens to drown me. I try and scream, but all that comes out is a sigh. I try and fight it, swimming hard against its current, but it’s useless.

The anger suffocates me until, like the natural ebb of the ocean, it leaves my body. I am left exhausted and defeated. Going through the routine of my life after the sheer violence of the rage is like swimming through mud with limbs made of lead. But just as I feel that I have a handle on things, just as land is in sight, the water swells and pulls me back again into its watery violence.

In addition to bouts of uncontrollable rage, I have been battling intrusive thoughts that can be downright terrifying. Please know that these are different than suicidal thoughts. Although I do think things like — that’s a big bus, it wouldn’t be terrible if it hit me by accident and I died. I mean, everyone is plotting against me and would rather that I was dead. They all hate me. They all think I’m a drama queen with this bipolar disorder thing.

But of course no one is actually thinking these things. My brain deforms acts of kindness, acts of indifference, acts of the everyday into something twisted and ugly. The actions of other people are gnarled until they are unrecognizable and I question my sense of reality.

It is hard to focus on work and responsibilities when your life is a battleground and land mines are everywhere. But I persevered, because that is what I do. I survive, despite the way that I feel. I push myself into work, smile, socialize, do what is asked of me. I try even harder to appear normal. All the while I am fighting the rage, paranoia, and exhaustion. I really just want to crawl into bed, pull the covers over my head, and cry. 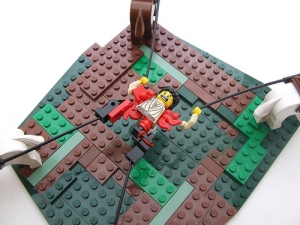 I thought a Lego man was less grisly depiction of being drawn and quartered.

Perhaps I am so tenacious in this state because I have spent the last 29 years of my life being drawn and quartered. I imagine horses tied to each of my limbs and a mysterious voice yelling for the horses to pull. My limbs rip from my torso as I try and fulfill all of the demands of everyone else, rather than what I need and want.  The voice that commands the horses is constantly criticizing what I am doing and telling me what I should be doing instead, regardless of how I am feeling.

I am sitting on the couch and it asks, “Why aren’t you at the gym?”

“Because I’m tired from fighting my fucking life.” I always start out tougher than I feel. I always feel like I can argue with the voice.

“That’s no excuse,” it snaps. “You could at least be working on your novel or your blog. Isn’t that what you really want to do with your life? Write?”

“Yes, but I’m really fucking tired because this week has been really hard.”

“Hard, you don’t know what hard is. You’re a pampered princess. Do you know what’s hard? Those kids in Africa who have to walk 10 kilometers each way just to get water for their villages. That’s fucking hard.”

“You’re just lazy. You’re a useless excuse of a human. You are pathetic. You are worthless.”

And that voice usually convinces me to do something – whether it’s hit the gym, clean the house, work on my blog – even when all I really want to do is curl up and sleep because I have been battling the ghosts that paranoia brings and tampering the rage the swirls inside of me. Even though I have been doing all of these things that take incredible amounts of energy, it pushes me to deplete myself further and further.

But it wasn’t until Friday that I finally told that voice to shut the fuck up. I will write my blog post when I get to it – if I get to it. I will go to the gym next week when I have slept a solid eight hours. I will socialize when I no longer feel like everyone is against me. For now, I will sit on the couch and watch TV. And that’s okay. That’s enough. I’m enough. And surprisingly, the mood lifted just a little. If only for a little while.

13 thoughts on “Bipolar Mixed State: Into the breach”

Sometimes you have to be your own hero.