It’s officially fall. For people without a mental illness this means, pumpkin spice flavoured everything, leaves changing colours, Thanksgiving, and Halloween. Except if you have a mental illness, like me, we are battening down the hatches to brace ourselves against the winter blues. The short, cool, cloud covered days and early nights do not help those of us who struggle with depression. For me, depression is more of a winter thing. In the Fall my anxiety amps up, like it knows I’m preparing for battle. And this Fall hasn’t been any different – other than my anxiety has been more extreme than normal. For the first time in my life, my anxiety is coupling itself with paranoia.

Admittedly, I have always had a bit of a paranoid personality. I’m that person who is convinced that whispering between people is always about me. Or that a person’s bad mood is somehow always my fault. This kind of paranoia I can rationalize. This sort of paranoia is due to my own insecurities, my desire to please people, and always wanting to play the peace keeper. 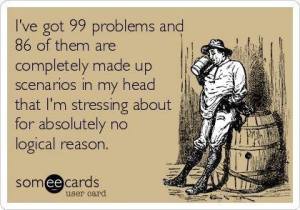 However, what’s difficult to rationalize is being terrified that someone is following me. When this anxiety creeps around me, I feel like all eyes are on me. It’s like I’m in a fishbowl and people keep tapping on the glass. Recently, I was walking home from the doctor’s office when an attack came over me. There was a man walking a few paces behind me and I was convinced he was following me. I could hear him whistling (a pet peeve of mine), which I was also convinced he was doing on purpose to annoy me. I tried to rationalize that this was extremely unlikely, except my body was sending adrenaline coursing through me telling me to run and get help. The panic got so bad that, despite being five minutes from home, I was going to call my husband to come and pick me up.

It’s not just paranoia that is troubling me, walking outside now feels like a life threatening experience. The sun is too bright and causes pain behind my eyes; staring at the computer screen does the same. The sounds of the city: sirens, city buses, and the whoosh of trucks make me want to curl up into a ball in the middle of the street. I want to shrink among the press of bodies on the sidewalk. And it scares me. With every passing day I feel like I’m tumbling further down the rabbit hole of insanity.

Petrified of how I had been feeling, I told my psychiatrist at the bipolar clinic. While I was there I was in the midst of one of these paranoid, can’t stop moving, panic attacks. She listened with empathy and heard me out (imagine!) and then prescribed me Propranolol while reducing my Latuda from 40 to 20 mg. Propranolol is a beta-blocker and is typically prescribed for people with high cholesterol. However, the drug has been found to reduce anxiety in people by slowing down the heart rate. 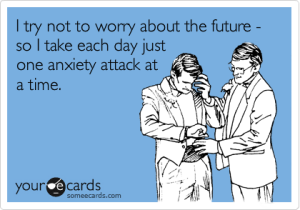 Now, a normal brain would go through that and think, during a panic attack your heart rate increases and therefore a medication that slows down the heart makes sense to take. I don’t have a normal brain. I have an anxious brain. I thought if I take this medication my heart  may slow down too much. What if my heart actually stopped? So I have been too afraid to take it even though it could potentially help me. Instead, before I leave the house, I take my “can’t give a fuck” cocktail of 25 mg of seroquel and 1 mg of clonazepam. And that’s anytime I want to leave my house, which frankly, I don’t really want to do without supervision.

This is the sad and pathetic reality of my life right now. I’m terrified that I might have a full blown attack and lose it in the middle of the street. But I’m lucky that I can retreat to my home when the anxiety and paranoia become too much to deal with. And this makes me think of all of the homeless people in my city that display symptoms of untreated mental illness.

My heart aches as I watch them talk to people only they can see. I can see so many of them are plagued by demons that are not so different than my own. Medically, there’s very little separating them from me. I just got a bit luckier in the lottery of life. I’m receiving treatment. I have a supportive family. People care if I get better. These poor souls are lost and as invisible as I sometimes want to feel. I escape to my home when the paranoia gets too great, where do they go? They have no safe space.