I don’t think this type of treatment fatigue is unique to those of us with bipolar disorder. Frankly, I think it can happen to anyone with a chronic illness.

There are those people out there who think chronic illnesses are just an excuse to be a lazy, parasitic, attention seeking baby. They have no idea how much energy it takes to be sick and how hard it is to fight day after day. It’s just what happens when you’re fighting your body or brain (or both) day after day. It’s what happens when you have so many doctors appointments that if your life was a play the scenery would be a series of waiting rooms with outdated magazines. It’s what happens when you become a medication guinea pig and you wonder, is this all worth it? They have no idea what it’s like to adjust and readjust medication until your brain doesn’t know if it’s going left or right anymore. And it’s not just testing new medication, but it’s also the side effects. The physical cost of coming on and going off so many medication.

We stopped Abilify because it was making me restless, anxious. and unable to sleep. My psychiatrist prescribed Latuda to help with my low mood, but it mixed with the Abilify still in my system and caused the psychotic and paranoid features of my anxiety attacks. To deal with that she then prescribed Propranolol, which didn’t make me feel any different. Now I’m coming off of the Latuda, starting something called Saphris, and reducing my Zoloft by 50 mg. Are you lost yet? I’m losing track of what I’m on and what I’m not. I’m losing track of dosages and what the medication is supposed to be doing. Which do I take with food and which do I take without? Which makes me drowsy and which causes me to be awake? 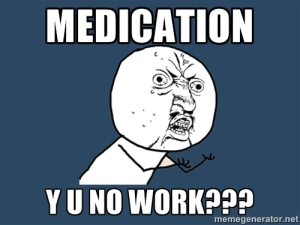 Right now, I’m fed up and frustrated with medication. There are some mornings that I stare at all the coloured capsules and tablets and wonder: is this really worth it? Some mornings I just want to flush all of my medication down the toilet and let the chips fall where they may. I want to stop seeing all the doctors and therapists and just let my illness take me away into whatever direction it wants to go. Maybe that’s just the nature of things. That’s how I’m supposed to be.

So for now, I keep taking my pills as prescribed. I keep going to my appointments. I keep doing all of the things that are supposed to promote good mental health and maybe one of these days my brain will cooperate and I’ll be able to reenter the world, healthy and happy.

6 thoughts on “Fed up and Frustrated: Bipolar Treatment Fatigue”